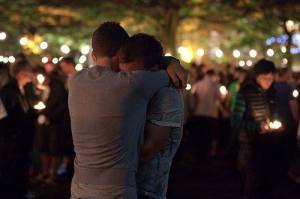 As soon as I emerged, I looked around for Jess. He smiled, and I rushed toward him.

“No. It was your decision to accept God into your heart.”

I closed my eyes and leaned against his chest. “Sorry, sorry. I’m getting you all wet.”

“That’s okay,” Jess said, wrapping his arms around my shoulders.

I cried as the baptism continued behind us. My new community accepted me and now, they continued to hold candles to guide us into the light. I have everything I need, a new beginning and a loving boyfriend.

Don’t forget to visit the Monday Flash Fics Group on Facebook to read the rest of the stories.

“Who let those cats in?” Lieutenant shouted.

Gilbert cuddled closer to Finn, rubbing his scent all over his mate. He ignored the men in his squadron that had no answer for the Lieutenant. The jerk sneezed and Gilbert wanted nothing more than to jump and scratch him all over.

Finn knew him well. His lover rubbed back against him, speeding up between the group. They pushed further into the barrack, climbing into their  bunks, shifting before everyone else chased them in.

“What the hell?” Gilbert asked, pretending to be awoken by the shouts.

Don’t forget to visit the Monday Flash Fics Group on Facebook to read the rest of the stories.

“You have two minutes to talk.”

Jasper leaned against the wall opening, stretching his legs forward. “I’m sorry I ate the last blueberry muffin. I didn’t know it was your favorite. As soon as we install the door, I’ll find you half-a-dozen.”

“Yes, okay,” Caleb responded before pushing up on his toes to reach Jasper– bare chest to bare chest. Reaching forward, he kissed him.”

“I knew it! You do love me,” a breathless Jasper said with a smile.

“You and muffins, that’s all I need,” Caleb responded.

“Do you think this will work?” Xolt asked before kissing Sadmiel.

“I’m not sure, but it’s worth trying,” Callek answered as he kissed Xolt’s neck.

Xolt trembled as his soon-to-be-mates wrapped him between their arms, their human bodies sliding against each other. Their skin felt foreign, and he missed his colorful tail, but as Callek said, this was their last resort. Who would have thought that a merman, a dragon, and an elf had any future together? But if their mating succeeded, they’d be able to share their gifts and live together, underwater, in the forest, or in the skies.

My favorite story of the event and I need to clarify that I didn’t read them all, was Homeless for the Holidays by Jaycee Edward— it’s a sad, but beautiful story.

I wrote the Glass Ornament for the event and wanted to write a sequel this year, but life happened. I did have a chance to revised my original entry, and I hope you enjoy it. Perhaps next Christmas the boys will get more of their story. Who knows, maybe X-mas in July?

Ford thought he’d collapsed in the middle of a San Diego sidewalk, as chills run through his body and a jolt of nausea almost tipped his world. Placing a hand to his mouth, Ford closed his eyes praying for his body to calm down. He had left the recruitment office feeling numb and heartbroken, incredulous of what had happened. It had taken less than thirty minutes for his life to take a turn for the worse. Ford knew he was being selfish, that Daniel’s promise had been wishful thinking, but Ford had held that string of hope close to his heart. Realizing their future together was banishing with every step had Ford ready to bolt. Their well-planned future had been transferred to Uncle Sam when Daniel signed on the dotted line.

Noticing Ford’s predicament, Daniel rushed him inside the next store. The unexpected blast of cold air shook Ford, but Daniel’s warm chest pressed against his back held him still. Daniel feathering kisses on the back of his neck made Ford sight and he relaxed against Daniel as he cradled him tightly.

Without warning, Ford turned to face Daniel. His bottom lip trembled before he murmured, “Please, promise me you’re not going to abandon me. That you’re not going to do something stupid, like getting killed on your first day.” Ford tried to hold the tears back, but they came anyway.

“Don’t worry, love. I promise not to get killed on my first day,” Daniel said, rubbing Ford’s jaw with his thumb.

“I’m sorry. I just can’t believe you signed off our future away. We had so many plans—”

“We still have plans, I’m not leaving yet. We’ll finish school, have the summer to ourselves, and then, I’ll go to boot camp.”

“Yes, and shortly after you’ll forget all about me,” Ford added with a sob.

Embarrassed for being so weak, Ford pressed his face to Daniel’s chest, hiding from an older couple trying to walk down the aisle they were blocking. At least the Christmas store in the heart of Hillcrest gave them a little freedom; no one will care about two guys hugging.

“Listen to me. We talked about this before. You know how important it is for me to serve just like granddaddy, dad, and Jamie.”

“I know. I just hoped… you’ll change your mind and choose me instead. Oh my God. I’m so sorry, Danny!” Ford turned away, trying to leave the store, but Daniel grabbed his waist and pressed his chest against Ford’s back once again. Ford knew anyone looking at them would see the sorrow in his eyes and Daniel’s attempt to cheer him up.

“That was so insensible, Danny. I’m really sorry,” Ford whispered.

“You have nothing to be sorry about. I love you, baby.”

With a small smile, Ford moved away from the embrace and roamed the aisle. At the back of the store, he stopped to look at a display of delicate glass ornaments. Daniel reached around him grabbing one out of the display before holding Ford’s hand. Ford’s eyes widen when Daniel kneeled down.

“I had planned to do this on Christmas day, in front of our families, but I need you to know that I chose you,” taking a deep breath Daniel continued, “baby, I promise to do everything I can to come back to you, to not get kill during my time in the Navy, and to never abandon you. Please promise me you’ll follow me around the world, making my days brighter. Ford Cameron Jennings, would you make me the happiest man alive and become my husband?”

Ford grabbed the ornament from Daniel’s shaky hands and jumped to wrap his arms around his fiancé’s neck. His momentum pushed Daniel backwards, making him lose his balance. Lying on the store floor, they kissed softly, as several customers clapped and catcalls cheered them up. Daniel broke the kiss and stood up, bringing a red-faced Ford up with him.

“Well, was that a yes?” Daniel asked.

“Yes! I promise to follow you around the world, making you happy for the rest of our lives. Daniel Tristan Matthews, I’d be honored to become your husband,” Ford answered, placing a chaste kiss on Daniel’s lips. “I just have one question, how am I supposed to wear a glass ornament on my ring finger?” Ford asked, with a smirk.

Walking hand-in-hand with Daniel, Ford smiled until they arrived at the check-out counter; surprised when the clerk gave them the glass ornament free of charge— their first engagement present.