I’m glad to have Asta Idonea here today to tell us more about her new release Wish You Were Here. Enjoy! 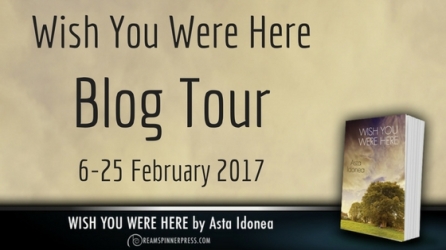 Title: Wish You Were Here

The death of Oakley’s sister has left his family broken and buried beneath their grief. In an attempt to get out from underneath their pain, they rent an isolated cottage in the Cotswolds. For Oakley, it’s an exercise in futility. He doesn’t see much hope for things to get back to the way they used to be, and he’s bored and restless as he waits out the time until he can return to the city and university. All of that changes when he meets local boy Bobby, and the connection between them is instant. Within a few days, Oakley is ready to walk away from everything to stay with Bobby. However, Bobby has problems of his own, and they might be more than the budding romance can survive. But they might also give Oakley a new perspective on his own situation.

Outside, the sky was darkening as evening approached. A tall, broad oak tree dominated the view on this side of the house. It had a thick canopy, though the leaves were already starting to brown in preparation for the winter drop.

Oakley was about to look away when a sudden movement caught his attention. He squinted through the glass. There was someone standing beneath the tree—a man judging by his silhouette. The oak was on cottage land, so no one but he and his parents should be there. He supposed it was one of the locals. If the owners didn’t rent the cottage often—which seemed likely given the state of disrepair—the villagers were probably used to coming and going as they pleased. The man’s presence didn’t bother Oakley, but a nagging feeling prompted him to go out and speak to him. There might be something wrong, and at the very least, he could warn the guy off for the next couple of weeks, since he doubted his parents would countenance anyone hanging around, watching them.

GIVEAWAY
Prize: (1 ) e-copy of my MM Sci-Fi novella Fire Up My Heart

Asta Idonea (aka Nicki J Markus) was born in England but now lives in Adelaide, South Australia. She has loved both reading and writing from a young age and is also a keen linguist, having studied several foreign languages.

Asta launched her writing career in 2011 and divides her efforts not only between MM and mainstream works but also between traditional and indie publishing. Her works span the genres, from paranormal to historical and from contemporary to fantasy. It just depends what story and which characters spring into her mind!

As a day job, Asta works as a freelance editor and proofreader, and in her spare time she enjoys music, theater, cinema, photography, and sketching. She also loves history, folklore and mythology, pen-palling, and travel, all of which have provided plenty of inspiration for her writing.

The blog tour for Dating in Retrospect, my States of Love novella set in Iowa, starts today! Don’t miss the chance to win a $20 Dreamspinner Press gift certificate. #Giveaway ends 2/28/2017. I’d be adding the links below as they become available. Have fun blog hopping!